An iconic theater’s tragic past leads to its restoration to former glory.

An ornate display of the Art Deco era, this movie palace, originally know as the Fox-Watson Theatre, was built in 1931. Native Salinan W. W. Watson, a wealthy wholesale grocer and banker brought the vision to life, along with Architects, The Boller Brothers (Kansas City) and Charles Shaver (Salina). At its time of construction, it was considered one of the most beautiful theaters in the state of Kansas. The theatre’s box office had a multi-tiered tower that was over 75 feet tall. However, tragedy struck in the 1954, when lightening hit the tower, causing irreparable damage. The top 3 tiers of the tower were removed shortly after due to structural and safety concerns.

The theatre ran successfully up until 1987, when it was closed and moth-balled by the City of Salina. Years later, a group of supporters, donors and enthusiasts moved towards funding and overseeing a historic rehabilitation of the entire building interior so that the theatre could be used and enjoyed once again. The team at Jones Gillam Renz was selected as the Architects to help bring the theatre back to life in 2003, and now, almost 20 years later, they once again were asked to help restore a missing piece of the theatre’s history: its box office tower and spire.

Stiefel Theatre for the Performing Arts 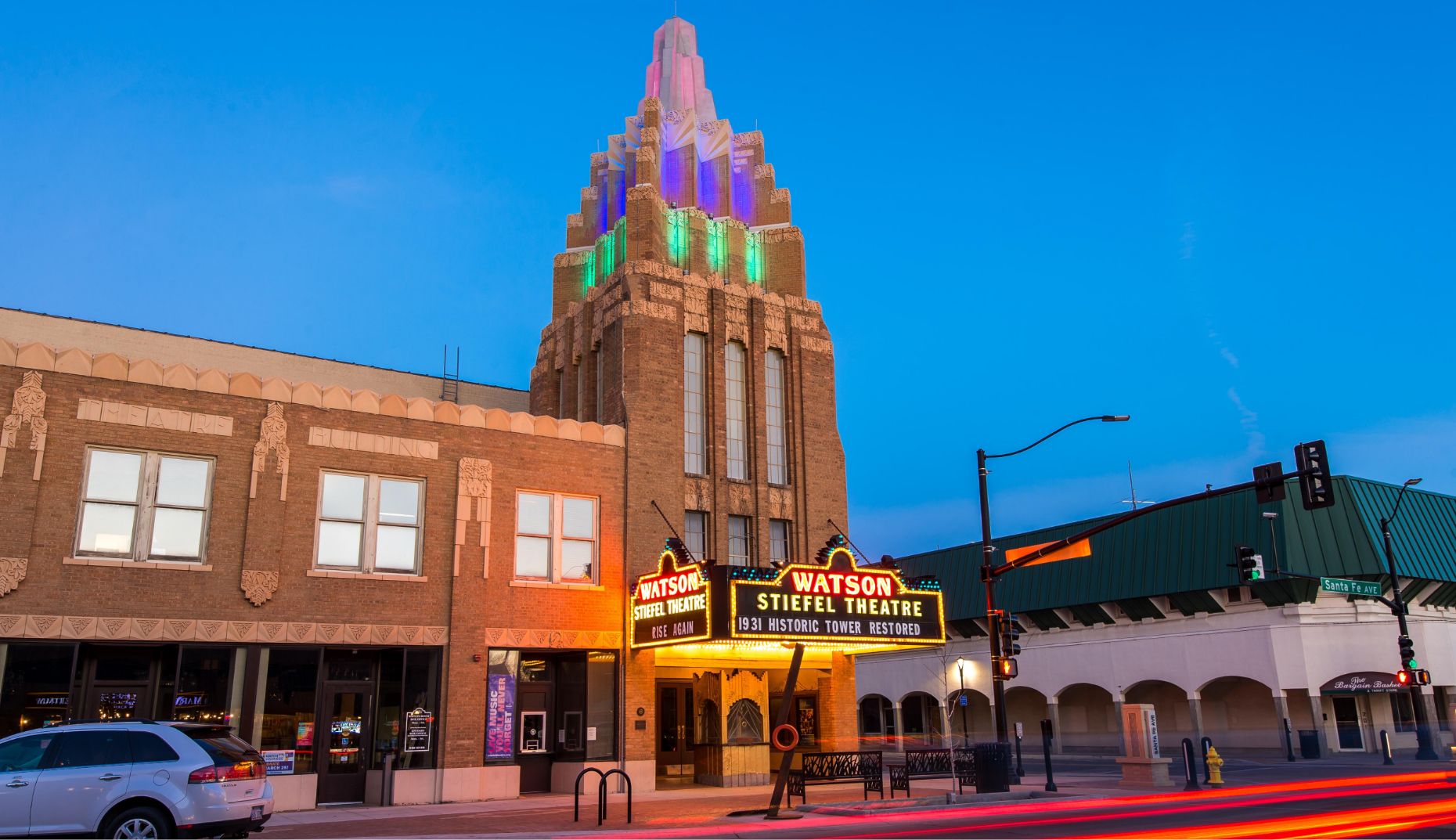 The team at JGR studied the original drawings, photos and sketches, and in an incredibly successful attempt to not only reconstruct the original tower, they also enhanced the theatre’s overall presence in the downtown area. 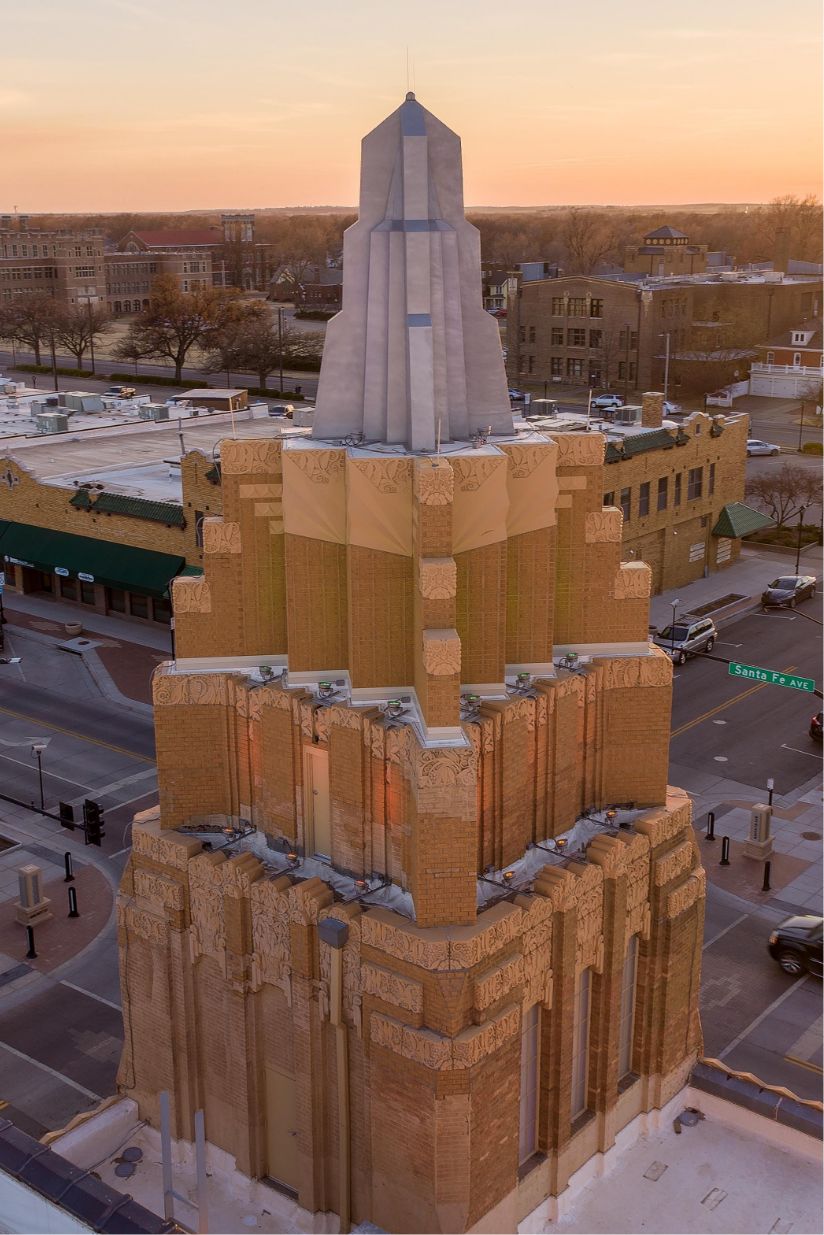 “Despite this project being a reconstruction of the original tower, no part of this project came easy for us. We had to not only study the original drawings and historic photographs, but also had to research and study other Art Deco buildings to try and interpret and replicate the original design intent.”

The original drawings for the tower were somewhat schematic in nature. It was not uncommon during that time period for architects to leave some details vague. This was to allow space for a master builder and his craftsmen to interpret and create art within the building elements themselves. This was especially prevalent in the Art Deco era, where buildings, like the Stiefel Theatre showcased unique geometric ornamentation and distinctive stone masonry characteristics. The original drawings and sketches served as a guide, but the designers and architects at JGR had to be innovative in their efforts to recreate some of the missing elements and unknowns.

The façade of the building is adorned with hundreds of custom hand-crafted terra cotta stone accents. JGR’s design team worked closely with Architectural Stone Products (Kansas City) to ensure that the new stones would compliment and resemble the original terra cotta found throughout the building. The team painstakingly spent hours measuring, sketching and photographing the existing terra cotta to help assist the designers in the re-creation process. The stone molds were then carefully and thoughtfully hand-carved in a very successful attempt to capture the original design intent. Not unlike the original terra cotta, the new stones were one-of-a-kind creations of art. 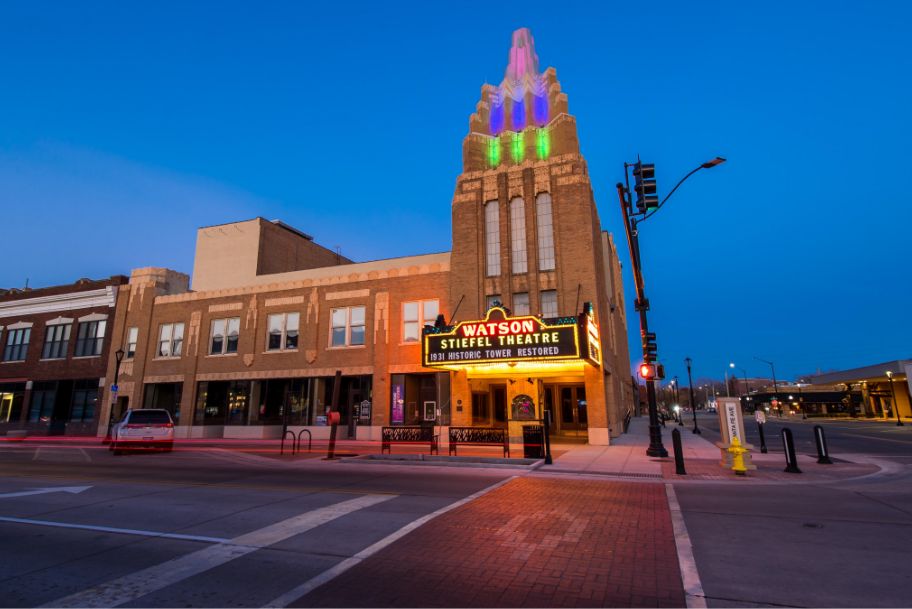 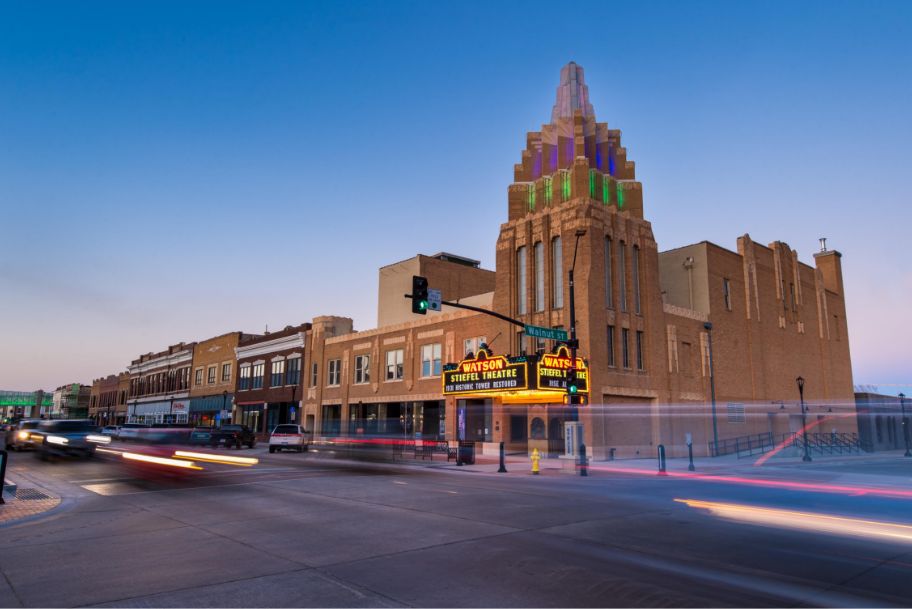 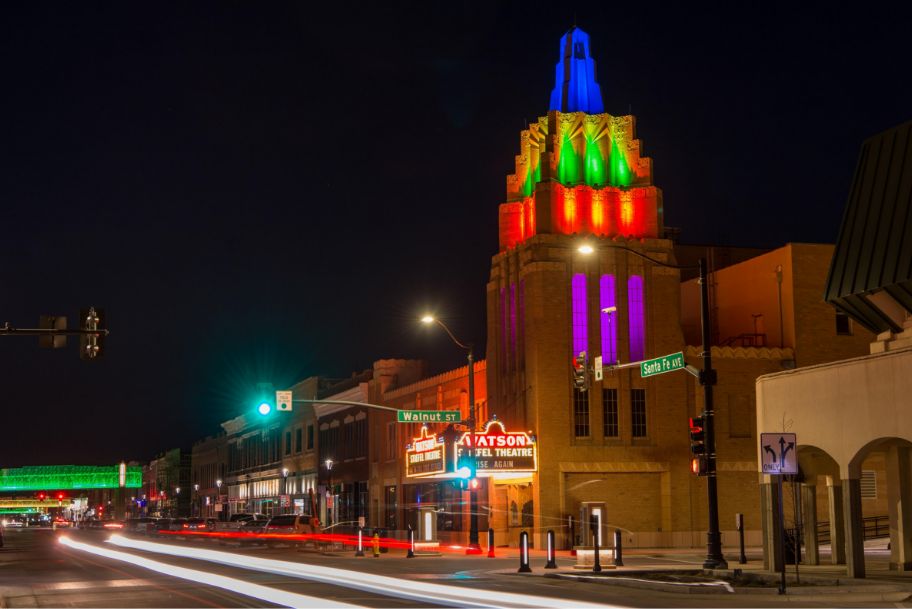 The missing top three tiers of the tower consisted of two lower tiers constructed of brick and stone, and a spectacular top tier made entirely of metal, and standing over 15 feet tall. The original design was no doubt of the brilliant Art Deco style, that was brought back to life when the metal spire was placed atop the box office once again. The design intent for the original metal tower may have been the most elusive of all. The original drawings only dictated the tower’s height and its construction material: Metal. The designers at JGR had to rely on old photographs and reaching out to the local public, libraries and museums for assistance.

“The tower helps bring the whole downtown together and symbolizes how lively it is downtown now. It’s the culmination of 20 years of work, and it’s been a wonderful progression. Salina should be proud of it.” 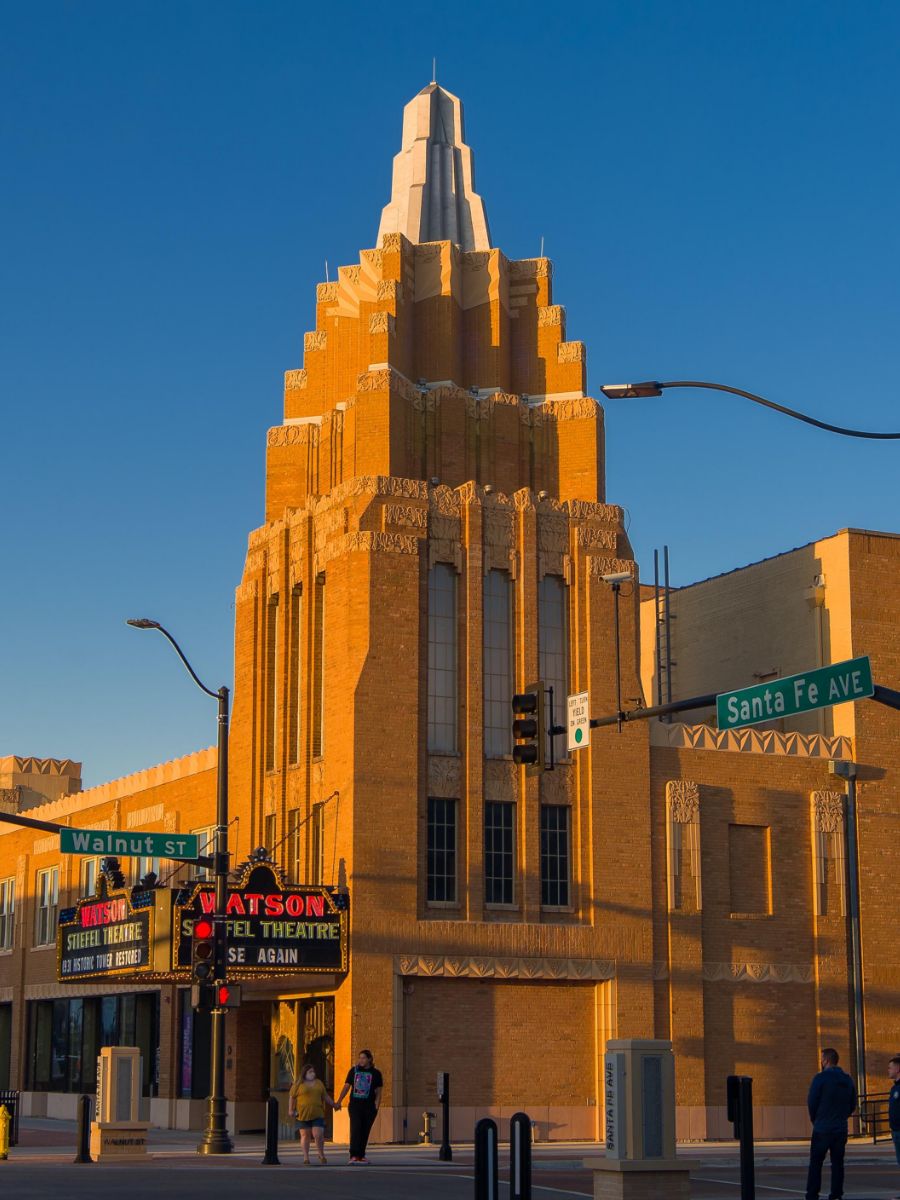 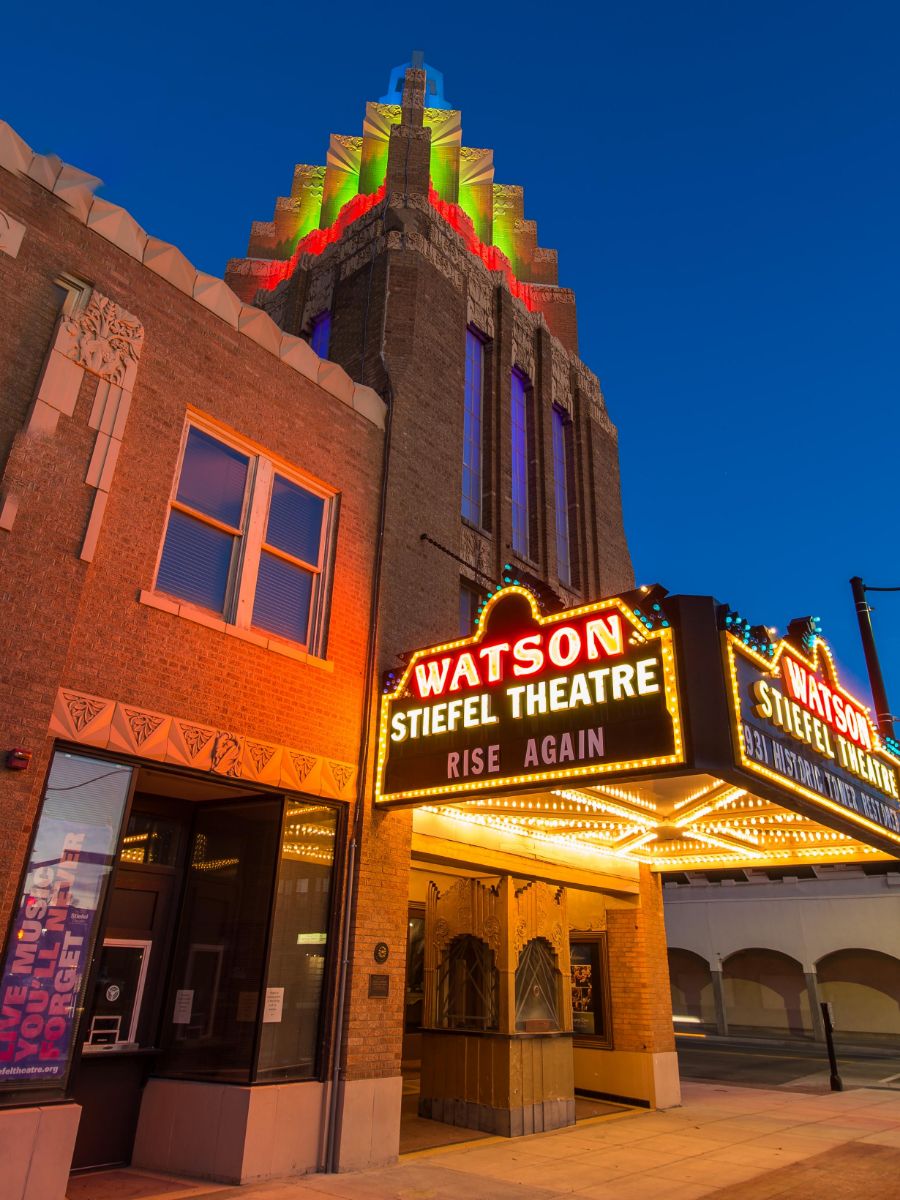 The final cherry on top of the cake was the amazing lighting features that accent the sides of each tier. Electrical Engineers, Wilson and Company, worked closely with the JGR designers to ensure that the tower would be a beacon of vibrancy and liveliness in the downtown area. The reconstructed tower has a total of 28 lights that communicate with a system that allows the Stiefel Tower to change colors, and add movement to the tower each night.

Despite the crushing financial blow experienced during the pandemic, the Stiefel has re-opened its doors and plays host to over 50+ performers, singers, bands, comedians and more every year. The theatre’s 1,200+ seats are full for nearly every show and it’s amazing repertoire consists of everything from the local Salina Symphony to big names like Earth, Wind and Fire and John Legend. The theatre continues to light up the sky every night and will be a vibrant cornerstone in Downtown Salina for years to come. 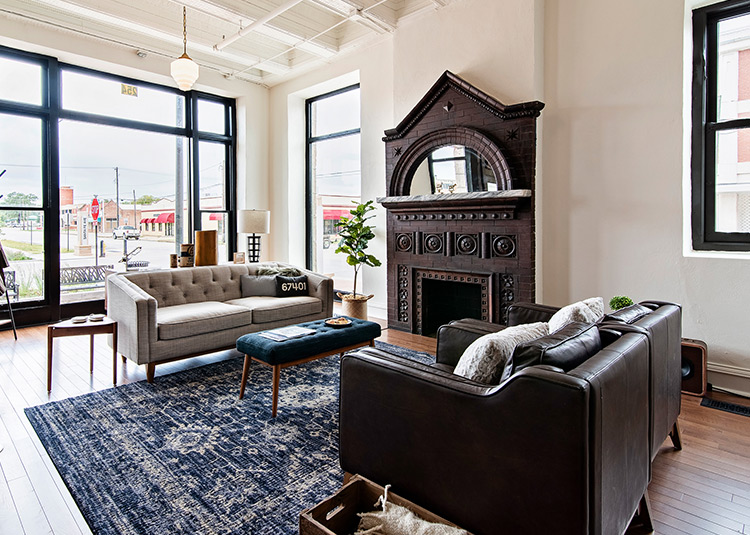 We value your feedback! Please feel free to reach out with questions, comments, or concerns.